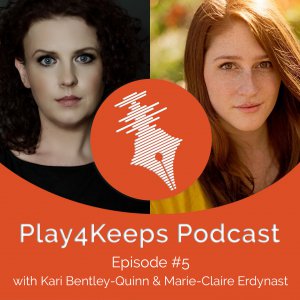 Join playwright Kari Bentley-Quinn and actor Marie-Claire Erdynast as they discuss Kari’s plays, including THE WORST MOTHER IN THE WORLD, which spark conversations from the serious–motherhood, postpartum depression, the importance of addressing mental health issues, how audiences react to complicated female characters, online misogyny and harassment–to lighter fare, like newly adopted kittens, the cities they love, and crying as an actor. Can you guess which city Kari cheats on New York with?

You can listen to THE WORST MOTHER IN THE WORLD on Play4Keeps Podcast premium feed today! Click here.

Kari Bentley-Quinn is a playwright based in New York City, originally from the little coast town of Stratford, CT. She is co-founder of Mission to (dit)Mars, a theater company based in Queens. Her work has been nominated for many awards, including the O’Neill Playwrights Conference, and she was the winner of the Rita and Burton Goldberg Award at Hunter College, where she earned her MFA. Marie-Claire Erdynast is an actor and theater administrator based in San Francisco, where she works at San Francisco Playhouse. She received her BFA from Southern Oregon University and while in Ashland was a reader for Ashland New Plays Festival as well as an actor in several ANPF productions.